American football: How to play and how to bet

The National Football League (NFL) was founded in 1920 with just ten teams from four states. In 1960 a rival American Football League was formed and the two went on to merge. This resulted in a greatly expanded league and the creation of the Super Bowl, which has become the most-watched annual sporting event in the United States. Although some International franchises have existed in the past, the game is currently played professionally solely in the US. 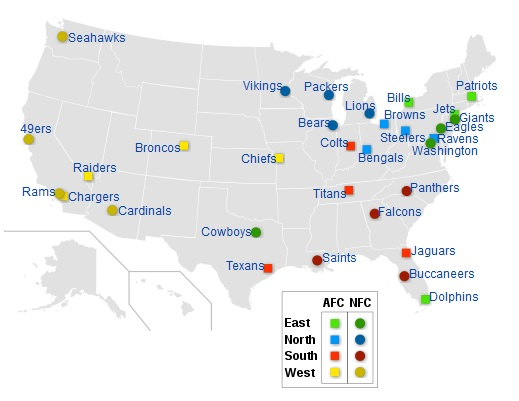 So how is it played:

Games are divided into 4 quarters each lasting 14 minutes. Although this implies a total game time of around an hour due to the clock stopping frequently when the ball is not in play, games typically last around 3 hours. A short 1 minute summary of the basic rules can be found HERE.

What are the bet types:

The most obvious and one of the two most popular betting markets for American football is betting "On the Outcome". This simply has two options, you can pick team A or team B, and you are given odds for each to occur. The NFL remains the only American league where a draw is technically possible, but the probability of it due to the peculiarities of the rules is extremely low. From 1974 to 2017, (some 44 years) only 22 draws took place.

Along with the bets on the outcome, "Handicap bets" are next in the greatest demand among the players. Especially at the end of the season, when the big clubs are gnawing for the playoffs, their matches with the underdogs are not interesting for analysis in terms of who will win or lose, but the handicap gives the player food for thought.

For example, if is it thought that the Patriots will beat the Dolphins by 17 points, then the bookmaker will offer the Dolphins a handicap of +16.5.  This means that as far as the bet is concerned the Dolphins begin the match with 16.5 points, so there is a fair chance that even though they won't win the match, they may be able to lose by less than their head start.  Thus, the bet will win.

You also need to understand that because of the specifics of the game, the value of the odds changes non-linearly, not in the same way as in most sports. In the NFL, the outcome of most of the games is decided by either a late three-point field goal or  a touchdown with an extra point (worth seven points in total)

Looking at past results you can see 30% of NFL matches end with a difference of either three or seven points, so the most popular odds among bookmakers are -2.5 and 3.5, -6.5 and 7.5. If it is a basketball game then the odds difference of 7.5 and 6.5 is quite close, however, in American football, there is a big jump in odds.

Another popular bet is on the "total points" both teams will score by the end of the game (taking into account overtime). On average, NFL teams score 43 points per game, but to get exactly 43 points per game is a rare occurrence. The most popular totals in the NFL are 41 and 44 points, each of which is found in about 4% of matches. There is an opportunity to bet "more/less" on individual teams, which is a good option, if for example you studied the attack of one team and the defence of the opponent, but are not sure about the rest of the game lines. Related and interdependent markets in relation to totals are specific bets on the team, for example, the team with the most productive quarter, as well as bets on who will be the first to get to a certain number of points.

You are not restricted to betting on outcomes at the end of the match but instead, you can bet on individual quarters and halves. All designated types of bets can be found for these time periods. By betting on a smaller period of time the chances of an upset increases, it is much easier for a bad team to take a quarter from the favourite than for them to consistently outplay the favourite throughout the entire game.

You can always place "Proposition Bets" on individual players which is to bet on their individual performance in a game.  For example, whether a quarterback will throw for a certain number of yards per match, whether he will throw interceptions, and so on. You can guess the number of touchdowns and field goals in the match, whether there will be at least one safety (a situation where the defence brings two points to his team by stopping the opponent in their own endzone). There are many options, but the limits on these bets are usually not as high as other more easily hedged bets.

Throughout the NFL regular season, which usually runs from September to January, you can bet on the playoff winner (Super Bowl winner), the winners of individual playoff conferences, and the winners of the playoffs (there are only 8, 4 in each conference) according to the results of the regular season. These are known as "Outright Bets". The NFL can be called a relatively competitive league, and even in the case of a season’s obvious favourite, they do not usually win by a lot. The league tries to keep the balance of power with the help of financial instruments and the draft system so that unexpected breakthroughs happen from time to time.

American Football is one of the most popular sports in the world and so it is not surprising bookmakers have found many "Special Bets" to offer which will attract customers. Before the start of the season, many bookmakers offer odds on, for example, which coach will be fired first, whether at least one field goal shall be scored from a distant 60 yards this season, and others of a similar nature. People also like to bet on there being a perfect season, in the history of the league, only four teams have held at least one "regular" continuous Season-long winning streak. The event is highly unlikely, and odds for this happening can be seen around 500/1 or more.

Like most sports these days you can bet on the NFL "In-Play". This is mostly unprofitable due to the increased betting margin, but at the same time with proper skill and a careful viewing of the game, there is a chance to catch profitable +EV odds. Immediately after a significant event, for example, immediately after a touchdown, there is a range of new odds offered before a consensus is found. Experienced players sometimes use this period to pick off the outlier odds which are offering value.

How to bet profitably: Tips and advice

Before betting on American football, there are certain things to be aware of and to consider. Below are some tips to hopefully help you make more successful bets. It is not true that these tips are a universal strategy which will always make a profit but knowing all these things and remembering them should help avoid unnecessary losses.

Before you even look at the odds bookmakers are offering you should, assess for yourself what chances each team has and weigh up what you think is likely to occur. It is important to take into account every variable which is significant - weather, injuries, home-field advantage, etc, etc. Having formed your opinion, it is now possible to compare this with the bookmakers' odds and look for value.

You don't have to bet on every match. It is much more effective to select and analyze the few teams that you think you know the best and focus on them. This will make it easier to track how you bet, where you are profitable and where you are losing, you can notice mistakes and in future develop a better strategy.

There is an old expression, that the early bird catches the worm.  Likewise here looking at the odds offered as early as possible is to your advantage. At the very start of the market, you can sometimes find better odds on the bet you want before everyone else also backs it and the bookmakers cut.

The home team advantage is not to be underestimated. Teams play matches in very different stadiums, with each having its own features, some are natural turf, and some artificial fields, some fill the stadiums with fans, others play in almost silence after the fans have long gone after too many failed seasons.

On the NFL's themed foreign websites, you can see the home factor for each team, but the average league bookmakers give the home team a 3-point advantage in line relative to its own away quotes.

Simplifying game analysis can be to your advantage. American football is a confrontation between attacking and defensive lines of players. Therefore, the simplest way to understand the strength of the team is to track how many yards their offence gains on average and how many yards their defence allows per game. Naturally, teams that cover more territory than their opponent win more often.

The quarterback is the main creator on the field, and a huge percentage of success depends on his form and skill. If the team playing has a top-five quarterback in the league, and there are no injuries in the attacking line, then it would be wise to avoid betting against that team.

The best quarterbacks play smart, throw hard and accurately, and make close-to-perfect decisions under pressure. Even a good defence cannot easily prevent ground being lost because a capable quarterback will always find holes. For example, New England, led by Tom Brady, won 13 of 16 games in 2017, and even though the average odds for them to win were just 1.30, backing the Patriots every game would have still made a good profit.

Beware of betting even on big teams whose quarterbacks have trouble making decisions and who are prone to throwing interceptions. The tension in the NFL, the most popular league in the United States, is enormous, and errors under pressure can knock the once-capable quarterback into a rut. It's better to wait out this bad form and get back to betting on the team when the quarterback feels confident again.

Next: Aussie Rules: How to play it and how to bet on it
Sponsored

The "Sponsored" icon means that the location (position) of the bookmaker in this list is determined on a commercial basis.

The ratings on Legalbet are compiled as honestly and objectively as possible, so we indicate "Not for sale" on them to make this clear.